There won’t be an SRC election,Vice-Chancellor of UHAS declares.

There won’t be an SRC election,Vice-Chancellor of UHAS declares.

by Christopher Sam
in UHAS
495
SHARES
1.4k
VIEWS
Share on FacebookShare on TwitterShare on WhatsAPP

When students thought at long last all is being set for the UHAS SRC and Local NUGS election to take place tomorrow, the Vice Chancellor,Professor John Owusu Gyapong was thinking otherwise.
Just about some few hours to the commencement of the UHAS SRC and Local NUGS election 2019, the Electoral Commission once again has managed  to pickle students with a communique indicating that the election has been postponed. How?, if one may ask. According to the official notice shared by the EC in relation to the postponedment of the election, it stated it was due to a directive from the Vice Chancellor of the institution. 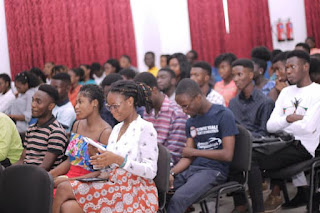 This unforeseen directive from the VC has kept the student populace in amusement, many are still wondering what at all could have pushed the VC to issue a directive to postpone students election. Meanwhile some student activists have taken it upon themselves to probe into the matter to seek explanation since the leadership of the SRC keeps depriving them of these sensitive informations.
Whiles we wait for the SRC president  to update students on why that directive from the VC to postponed the election tomorrow, students are been encouraged to keep calm. Any new development will be communicated to you as soon as possible. Stay tuned.

What do you think? Leave your comment below.
Share198Tweet124Send