JUST IN: COP Maame Tiwa Has Been Removed As CID Boss

US President Donald Trump’s personal assistant has been forced to resign from the White House after leaking private information about his family.
Madeleine Westerhout, 29, was abruptly removed on Thursday after the president learned she had been talking to reporters at a dinner this month.
She was drinking and bragging about her access to Mr Trump during his holiday in New Jersey, CBS News reports.
Ms Westerhout had worked with him since the first day of his presidency.
The White House revolving door: Who’s gone?
The White House has declined to comment on her departure.
The New York Times, which first reported her firing, cited a White House source who said she is now considered a “separated employee” and would be barred from returning to the executive mansion on Friday. 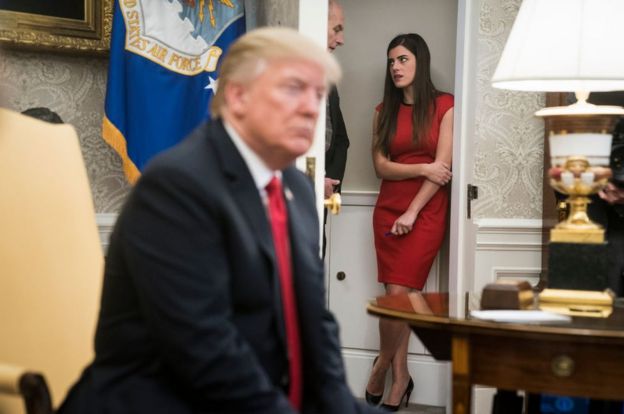 Image copyright GETTY IMAGES
Image caption Ms Westerhout seen talking with former White House chief of staff John Kelly
Described in US media as Mr Trump’s gatekeeper, she had an office directly in front of the Oval Office in the West Wing.
Her comments were made in an off-the-record dinner chat with reporters at a hotel in Berkeley Heights, New Jersey, during Mr Trump’s holiday at his club in Bedminster, New Jersey, earlier in August.
Sources told CBS News she was drinking and disclosed details about the president’s family. She also reportedly gossiped about broadcasters seeking access to the president.
It is unclear how Mr Trump learned of the conversation. 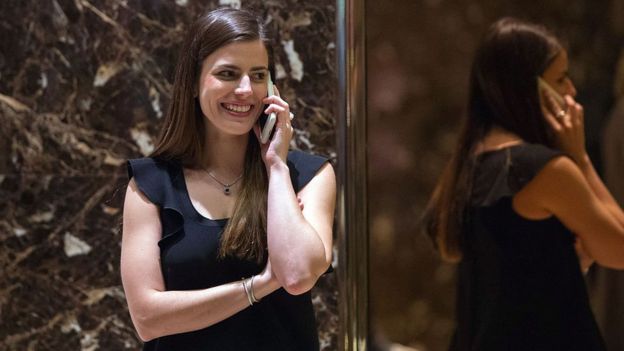 Image copyright GETTY IMAGES
Image captionMs Westerhout in the lobby of Trump Tower
Several White House officials had long suspected Ms Westerhout of disloyalty to Mr Trump, with one former official telling CBS: “She was a spy from day one who sought to use her proximity to the president to curry favour with his detractors.”
According to two books about the Trump White House, Ms Westerhout, a former Republican National Committee aide, was upset and seen crying on election night once it became clear that Mr Trump had won.
Despite her apparent dismay at Mr Trump’s victory, she managed to land a reported $145,000 (£120,000) position as his gatekeeper.
During Mr Trump’s transition, Ms Westerhout was often seen escorting guests through the lobby of Trump Tower in New York. 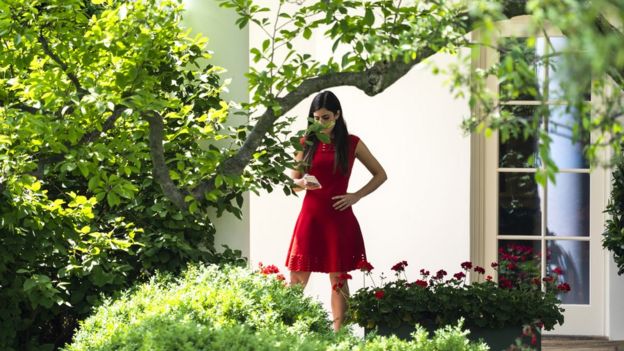 Image copyright REUTERS
Image caption Madeline Westerhout standing outside the Oval Office last year
According to the New York Times, she has a private Instagram page where she posts about her life in the White House and travels with the president.
In one post she joked about printing out a piece of paper that Mr Trump had held up at a public event.
When veteran journalist Bob Woodward complained to Mr Trump in an interview that his request to speak with him had not been passed along by more prominent aides such as Kellyanne Conway, Mr Trump said he should have contacted Ms Westerhout.
“Madeleine is the key. She’s the secret,” Mr Trump said.
According to CBS, Mr Trump has also often referred to her as “my beauty”.

What do you think? Leave your comment below.
Share197Tweet123Send

Andrews Aibi Junior is a creator, editor at HyperCitiGh.com, an online digital platform focusing on relevant, reliable, and timely Top Local and campus News. He is a student Planner with focus on socio-economic analysis. contact @AibiAndrews on twitter

JUST IN: COP Maame Tiwa Has Been Removed As CID Boss