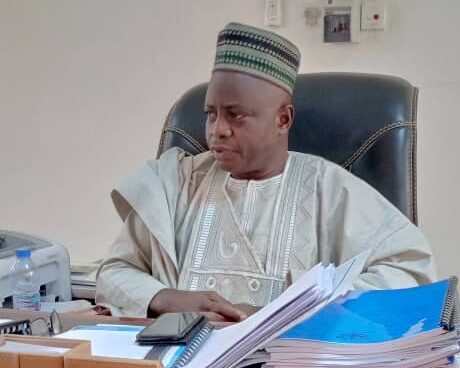 According to him, they now lie in wait inside a bushy border of a road and when a person travelling by an automobile approaches in their direction, the armed gangsters drive herds of cattle from the bush into the roadway.

The motorist would assume the cattle are being led as usual by herdsmen to the opposite side of the highway to graze and so would be compelled to slow down for the livestock to cross over. Whilst the foot of the unsuspecting motorist is resting on the brake pedal for the crossing cattle, the bandits would seize the moment— they would emerge from the bush and strike their target.

“The armed robbers are now using different tricks. For example, they will bring the cows to block the road as if they are crossing. If the cows are on the road, there is nothing you can do; you have to stop. It’s a new trick they are deploying and we have taken a decision as to what to do about that,” the Chairman of the Regional Security Council (REGSEC) said in a Starr News interview.

The minister also spoke of plans to put up more police stations, beef up security patrol operations and enhance the government’s database management system on new faces found in the region.

“We’ve also realised that sometimes the criminals don’t actually live in the region. They come to the region, commit the crime and go back. We are enhancing our database because some of these guys might have committed crimes before and so if we have a very good database, we can trace them.

“And you can also see that we are having problems with our lighting system also. And in fact, we’ve realised that in some of the streetlights, people actually cut off their wires just to make sure that Bolgatanga (the region’s capital) is dark. You would not believe this. But I don’t know why people would do things like this― either they want to perpetrate crime or it’s politics, you really don’t know,” he stated.

In recent times, some deprived communities in the region received aid from some foreign hands that reportedly did not establish any link with the Upper East Regional Coordinating Council (UERCC).

The supposed donors surfaced from behind the shores of Ghana and toured the communities, drilling boreholes for free and distributing free food items to the people living in those areas.

The former Ghana’s Ambassador to Morocco told Starr News the trend gave him more concern than relief as a Regional Minister. His position was grounded in the fears that donations and acceptance of unsolicited giveaways from entities of unclear backgrounds, if not controlled, might end up being a ‘Trojan Horse’ through which some unscrupulous elements would penetrate the ‘gates’ of the communities on the receiving end and eventually turn the region on its head.

“Another thing residents should be careful with is people coming to give them freebies. There were people that the National Security identified. They had been in the region for almost four years. And what they do is to give communities water and things like that. There is no free lunch anywhere. They have been deported. If you are doing an NGO, pass through the right channel so that the RCC knows about you. They are gone. In fact, recently, during the Muslims’ festival, some people came to the region and bought over 200 cows. They were sharing the 200 cows to people in the region and people were grabbing the meat and even beating each other because of the meat.

“You see, as a Regional Minister, I am worried that things like these are happening in my region. I ask why people are doing this. There are Ghanaians who take these things and no one reports. We need to educate the people to understand that this country is ours and that people can come and change the way we live by giving us these freebies. If somebody wants to give you something, let us know so that we check the person to be sure the person is okay before you receive anything from that person,” he said.

He stressed: “Let’s be vigilant. The police cannot be everywhere. If anybody sees strangers, please, report so that we can find out who they are. We have also asked all hoteliers to take proper identification of visitors by taking not only their names and telephone numbers but also the details on their identification cards so we can at least use the details to trace the person if there is a problem. We have asked transport operators moving into the region and out of the region to do same.”