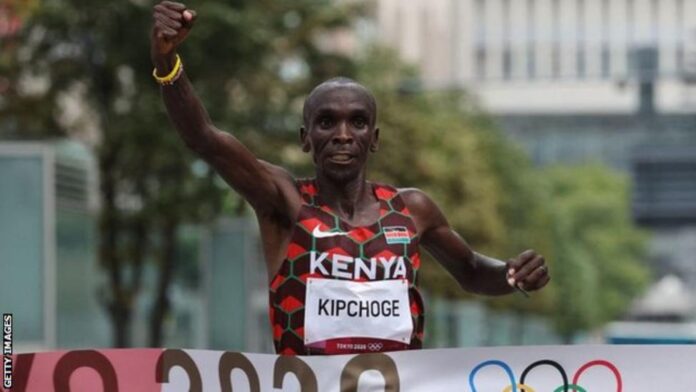 Eliud Kipchoge says he has “fulfilled” his legacy after the Kenyan became the first athlete since 1980 to retain an Olympic marathon title at Tokyo 2020.

Regarded as the greatest marathon runner of all time, the 36-year-old crossed the line one minute 20 seconds ahead of the Netherlands’ Abdi Nageeye.

In the race for bronze, Belgian Bashir Abdi edged out Kenyan Lawrence Cherono.

“I think I have fulfilled the legacy by winning the marathon for the second time, back-to-back. I hope now to help inspire the next generation,” world record holder Kipchoge said.

“Tokyo 2020 has happened, it means a lot. It means there is hope. It means we are on the right track to a normal life,” he told BBC Sport. “We are on the track to our normal lives, that is the meaning of the Olympics.

“I am happy to defend my title and to show the next generation, if you respect the sport and be disciplined you can accomplish your assignment.”

It is a fourth Olympic medal for Kipchoge, who famously recorded the first sub two hour marathon in 2019.

Kipchoge suffered his first marathon defeat in seven years in London last October, but he looked in control throughout the race in Sapporo, Japan, before moving well clear of the field after 30km.

Britain’s Chris Thompson was 54th in 2:21:29, however compatriots Callum Hawkins and Ben Connor did not finish the race.

Scottish record holder Hawkins, who collapsed in the Gold Coast heat at the 2018 Commonwealth Games, had placed ninth on his Olympics debut in Rio but was unable to stay with the leaders before withdrawing before the 30-kilometre mark.

On Friday, Kenya’s Peres Jepchirchir won the women’s marathon in 28C heat and, while the temperatures reached 27C on Saturday, the men benefitted from increased cloud cover.

Brazil’s Daniel Do Nascimento suffered a nasty-looking fall when in the lead group and was among the 30 athletes to pull out.