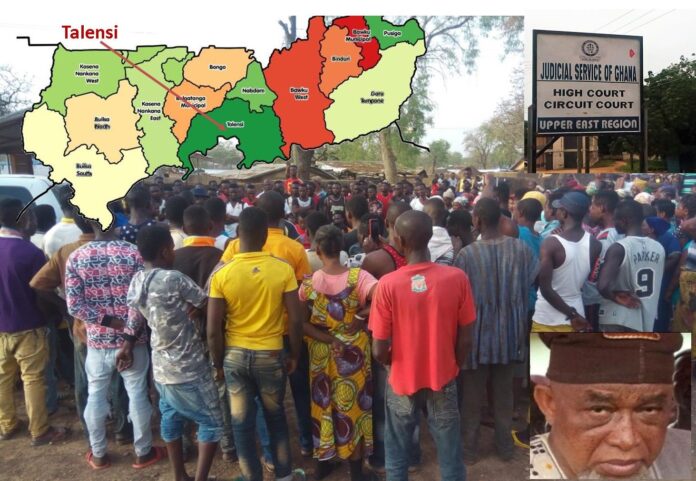 Members of the Concerned Citizens of Talensi (CCT) who voiced their dissatisfaction recently against a defamation-related judgment passed against them by a Circuit Court in Bolgatanga, Upper East regional capital, have filed a notice of appeal.

The court ordered the human rights activists, who have been fighting social injustices in the mineral-rich-but-deprived district, to pay Gh¢40,000 to the chief in damages for reportedly making a defamatory remark against him and to retract the said comment with an apology.

But the appeal notice, signed by a renowned lawyer, Dr. Dominic Akuritinga Ayine, says: “The judgment is generally against the weight of the evidence.”

The notice was filed on Thursday August 5, 2021, to the Court of Appeal in Tamale, Northern Region, through the Circuit Court in Bolgatanga and a copy asked to be served on the chief.

“The whole decision of the Circuit Court, Bolgatanga, dated 30th day of July, 2021, dismissing the case of the defendants/appellants herein be set aside and judgment entered for them for all the reliefs contained in their amended Statement of Defence filed on the 1st day of June, 2020,” the appeal notice adds.

The basis of the defamation lawsuit between the chief and the CCT members was a statement made by a former Minister of State at the Presidency, Rockson Ayine Bukari, on an undercover tape.

The top government appointee, in an attempt to kill an investigative story on the judicial system with bribes, was heard in a telephone conversation saying: “… the Shaanxi people, the Tongo Rana (the Paramount Chief of Talensi) and myself, we’ve supported them all along… the Cassius people are not reliable…the Tongo Rana said I should try to tell you (Edward Adeti) not to do it (publish the story) because it would affect them (Justice Boon and the Shaanxi Mining Company Ltd)…”

Bukari resigned from government after tapes of the bribery attempts were made public. Ghana’s President, Nana Addo Dankwa Akufo-Addo, accepted the resignation but the government is yet to respond to calls from prominent figures and anti-corruption bodies including the Centre for Democratic Development Ghana (CDD-Ghana) and the National Patriots against Injustice and Corruption (NAPAIC) for the resigned minister and all those he cited on the tape to be investigated further and prosecuted.

The paramount chief, whom the former minister cited on the tape, denied any involvement in the scandal and sued the CCT members for defamation after they called for his resignation. He also sued some other persons in the Upper East Region over the same issue. The rest of the civil suits are being heard in courts at present. But Rockson Bukari, who is the sole source of the allegations, is not included in any of the defamation-related cases initiated by the paramount chief over the ‘Rockson Bukari Tape’. The exclusion of the former minister from the cases has continued to raise questions in many places.

“The chief could have found a way of solving this thing without court. Sincerely speaking, I don’t want to get so much into the story; I am not from Talensi; but I think that the legal tussle was unnecessary. Let this matter be solved amicably. If they sit down and allow this matter to travel to the appeals court, then it’s a disgrace, a shame. At the end of the day, nobody is going to win in this matter. Everybody in Talensi should be concerned about this matter,” a social commentator said on GBC-URA Radio (a state broadcaster) after the CCT members announced their appeal plans.

Another policy analyst added his voice on the radio: “Rockson, who made the comment and the concerned citizens rode on the back of that particular comment to make the comment they made, what happened to him? What happened to Honourable Rockson? My thinking at this point is maybe they (the CCT members) are just some vulnerable people, that is why they are being sent to court. It was Rockson who was heard loud and clear but it is these helpless, poor and vulnerable guys, who are just fighting for the people of Talensi, who are being dragged to the law court.”

Meanwhile, some groups have announced plans to take Rockson Bukari and the names he mentioned on the undercover tape before the Special Prosecutor.