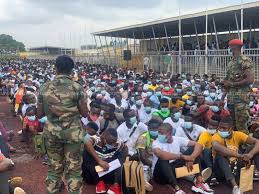 Security analyst Festus Auben says the so-called ‘protocol’ recruitment in the armed forces and other security agencies is a reality.

The phenomenon, popularly known as ‘protocol list’ has been a stumbling block for many who wish to join the various security agencies, with reports of bribery and corruption over the years.

Mr Auben’s comment comes after president Akufo-Addo gave the go-ahead for the recruitment of over eleven thousand persons into the various security agencies, among others.

This resulted in an extremely long queue of military personnel hopefuls at the El-Wak Sports Stadium which has been attributed to the high rate of unemployment in the country.

Speaking to Francis Abban on the Morning Starr Thursday, Mr Auben believes that many of the hopefuls may not get admitted due to the so-called ‘protool list’.

He said “protocol list in the Armed Forces is a reality.”

“If you look at the number of people who queue to get recruited, it tells you about the general unemployment in the country.”

He went on to add that “people need jobs and they’ll fight for any job that comes. But we need to look at the systems as to whether people act professionally when recruited.”

“We need to make sure people meet the criteria for the recruitment because of the kind of training they are put through.”

He added “the unemployment conversation is one that transcends many sectors so we need to look at it from the broader sectoral levels. I’m concerned about what they do when they get the opportunity to serve the nation when recruited .”