Police clamp down violent crimes across the country 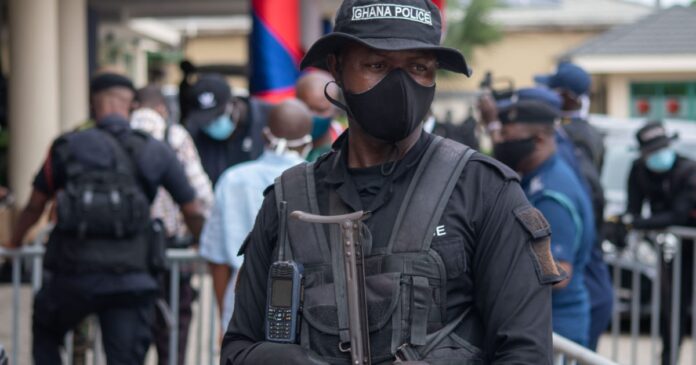 Series of arrests in connection to serious and violent crimes have been made across the country.

The alleged crimes consist of murder, kidnapping, and robbery.

At Kintampo, two alleged robbers, Yahya Dramani, 31 and Prince Twumasi, 27, were arrested by police at Pramposo for allegedly robbing two men of their monies and their car on August 11, 2021.

One Alhassan Zukurah, suspected to be part of a robbery syndicate was arrested at Kumbungu for allegedly robbing a mobile money agent on July 15th, 2021. Items found when the suspects’ house was searched include a toy pistol, Mobile phone scratch cards, a vest for soldiers, and some alleged stolen phones.

Two suspects, Karim Salifu, 29, and Karim Issaka, 30, were arrested on August 11, 2021 at Bimbilla for allegedly robbing someone of his motorbike. He pleaded guilty in court and has been sentenced to 15 years.

Outside the capital at Shai Hills, a driver was arrested for conspiring with two others to rob his Chinese boss of GH200,000. Two others are on the run for allegedly being part of the criminal plot.

A suspect, Umar Abubakari, 24, has been arrested for allegedly robbing two men of their motorbikes and mobile phones. Three others are on the run for allegedly conspiring with Umar.

At Osu in Accra, a suspect George Gyamfi was arrested on August 11, 2021, for attacked two persons in an attempt to rob them of their purses and mobile phones. After an alarm was raised, some residents in the area arrested the suspects and handed them over to the police.

In the Ashanti Region, police arrested an alleged murder fugitive, Okyere Baffour, 28, at Oforikrom. The suspect is wanted by the police in Bibiani in connection with the alleged murder of his wife, Jessica Afi, whose body was found with multiple stabbed wounds.