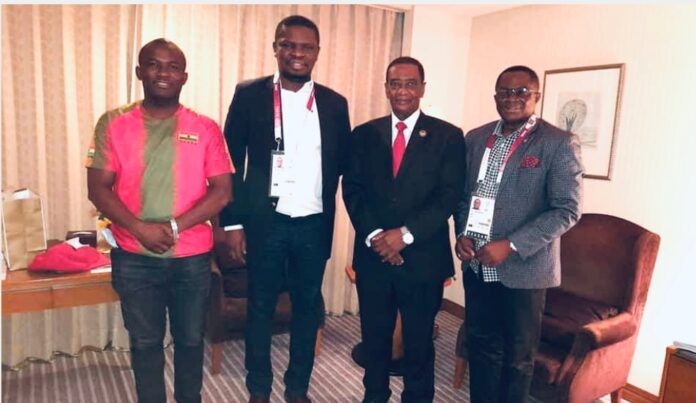 Ghana’s Minister of Youth and Sports, Hon Mustapha Ussif has met with Ghana’s Ambassador to Japan, His Excellency Frank Okyere in Tokyo, to deliberate on matters relating to Ghana’s participation in the ongoing Tokyo 2020 Olympic Games.

The Minister, who arrived in Japan over the weekend will also use his stay in the Asian country to attract technical support from the Japanese Government in the hosting of the 2023 African Games and then also, to gain knowledge from their experiences in hosting these global games.

The Minister also used the meeting to express his gratitude and that of President Nana Addo Dankwa Akufo-Addo to the Ambassador for the various roles played by the Embassy in Japan to ensure smooth camping of the Ghanaian contingent in Inawashiro prior to the Games.

The Ambassador, who has on countless occasions extended support to the Ghanaian team expressed his delight in receiving the Sports Minister and congratulated Team Ghana for the splendid display of Ghanaian tradition and culture during the opening ceremony of the games and for winning the first boxing competition at the tournament by Flyweight boxer Sulemanu Tetteh.