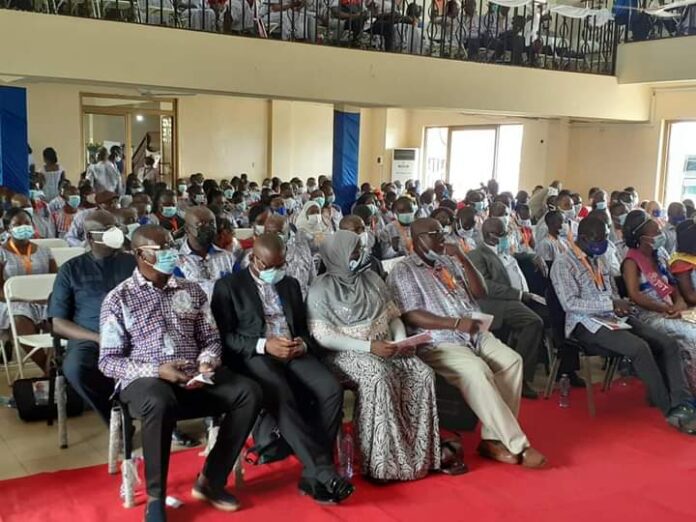 The Ghana National Association of Teachers (GNAT) has called on President Akufo Addo to initiate processes to establish a Commission to look into the poor condition of service of public sector workers.

The President of GNAT Philippa Larsen said there is an imminent disturbance in the labour front over unfairness and disparities in conditions of service in various categories of officeholders which requires immediate redress.

“The current system of remuneration in the public sector is not fair. It favours some categories of office holders in the public service and we are not going to agree. We will not agree to that. We are asking the President of the Republic H. E Nana Addo Dankwa Akufo Addo to as a matter of Urgency initiate a process of setting up a Commission to look at salary levels of public sector workers in the country.

“We are calling on the President otherwise there will be no peace and the country will become ungovernable” Phillipa Larsen warned during the 6th Quadrennial and 53rd Delegates Conference of Eastern Regional Ghana National Association of Teachers (GNA) in Koforidua on Thursday, August 5, 2021.

The President of GNAT expressed the disappointment and displeasure of the association over the recent paltry 4% increment in public sector salaries by the government which has sparked outrage.

“I cannot conclude my message without establishing my greatest displeasure about the paltry 4% and 7% salary increment given to public sector workers for 2021 and 2022 respectively. That was not what we were expecting. And that is why my General Secretary doesn’t want to talk about it. He is so sad within him and I am also sad. All teachers are so sad. The ongoing discussion on various social media platforms indicates clearly that workers are understandably unhappy with the outcome of the negotiation. We are not happy either. We have to settle on the relatively low rate of increment reluctantly after intensive negotiation spanning many years ”

The Eastern Regional Minister Seth Kwame Acheampong who was a guest of honour reiterated the government’s efforts to maintain the welfare and the development of teachers as a major priority in its education policies.

He said teachers remain the fulcrum upon which government education policies revolved, affirming that without them the success of government policies would be impossible.

Speaking on the theme “GNAT at 90: Surviving as a reliable and Vibrant Teacher Union in the 21st Century- Tracing the Journey, explicating the essence and examining the Prospects “, the Regional Minister said urged teachers to build their capacities to meet the changing demands and dynamics in teaching and learning.

He, therefore called on them to used the occasion of the Delegates Conference to discuss thoroughly measures that would ensure job satisfaction and improve teaching and learning.