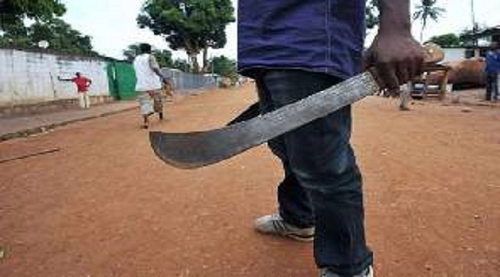 Over 500 residents in Kojokrom in the Komenda Edina Eguafo Abirem District in the Central Region are homeless after over 200 Land guards invaded the community and demolished their houses leaving them stranded.

Investigations by EIB Network’s Central Regional Correspondent Yaw Boagyan has revealed that the Land guards invaded the community without asking the residents any questions and started demolishing their houses.

Reports indicate that the land has been sold to some businessmen and without giving the residents prior notice, hired some land guards and invaded the Komenda Kojokrom Community Sunday evening and started to demolished their houses.

They also destroyed farm produce and killed their domestic animals.

Speaking to Yaw Boagyan, the Assemblyman for Kojokrom Electoral Area Isaac Mensah appealed to the Chiefs in the Komenda Edina Eguafo Abirem District to come to the aid of the Victims and support them get their land back.

The Assemblyman said, “I know nothing about the incident, I just had a call that some land guards have invaded the Electoral Area destroying the residents’ properties, I got there and there were gone.”

The Land guards were seen holding guns, Cutlasses, dogs and threatened to kill the residents if they refused to leave their rooms.

Meanwhile, some of the affected residents also appealed to the government to come to their aid. According to the residents, some of their children are nowhere to be found.

“Our husbands are also nowhere to be found, we may suspect the land guards have kidnapped them,” they added.

The case has been reported to the Komenda Police for an investigation but no arrests have been made so far.