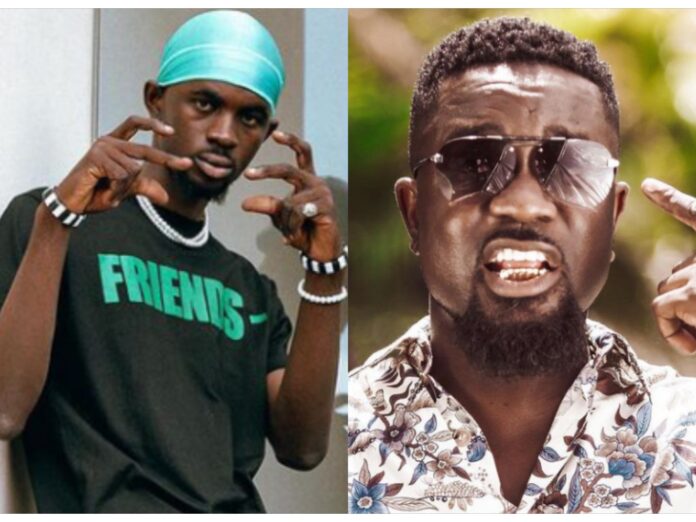 According to him, Black Sherif’s attitude in the music industry is the strongest asset every artist can possess.

He also noted that the hit track is the number one song he listens to, as its always on repeat.

Sarkodie made this known in an interview with Okay Africa.

When asked “what song do you have on repeat right now?” he replied, “Second Sermon” by Black Sherif. He’s just pure talent, you know. He’s raw, he’s real, and he’s super passionate and that’s what I go for in artists.”

He added, “I believe that’s the strongest asset every artist can possess. I think he’s super passionate and definitely has incredible talent.”

Being in the spotlight has not been all rosy for Black Sherif whose real name is Mohammed Ismail Sherif.

He received criticisms from a section of the public, particularly civil society groups, following the release of the video for Second Sermon.

In the video, some young men brandished machetes for which he has been condemned for promoting violence.

In an explanation, however, Black Sherif defended that the video showcased the creativity of the arts which was not easily understood.

Black Sherif released a single ‘Cry For Me’ in 2019 but started gaining popularity in 2020, thanks to the success of the ‘Money’ single and later, ‘First’ and ‘Second Sermons’.

While the focus on poverty seems to have caught on well with music audiences earning him seven million streams on Boomplay and over eight million on Audiomack, he said that theme was not just for the numbers.

In a recent interview, he told Graphic Showbiz that, “I don’t talk about poverty, I talk real-life happenings and I don’t think I will ever write songs that I don’t relate to or don’t know anything about.”

Sarkodie affirms his king status with his seventh studio album,  ‘No Pressure.’ And the follow-up to 2019’s Black Love which brought us some of the Ghanaian star’s best music so far. King Sark may be as big as it gets, but the scope of his music is still evolving.

Sonically, “No Pressure’ is predominantly hip-hop, with the first ten tracks offering different blends of rap topped off with a handful of afrobeats and, finally, being crowned at the end with a gospel hip-hop cut featuring Ghanaian singer MOG.

As far as the features go, Sark is known for collaborating mostly with his African peers but this time around he branches out further to feature a number of guests from around the world.

Wale, Vic Mensa, and Giggs, the crème de la crème of rap in America and the UK respectively all made appearances, as well as Nigeria’s Oxlade, South Africa’s Cassper Nyovest, and his fellow Ghanaian artists Darkovibes and Kwesi Arthur.