How to buy 2021 WASSCE Result Checker via Momo & WhatsApp

The owner of Leicester City FC died when his helicopter crashed outside the stadium, the club has confirmed.
Vichai Srivaddhanaprabha, two members of his staff, the pilot and a passenger were killed when the aircraft crashed at about 20:30 BST on Saturday.

Witnesses said the helicopter just cleared the King Power Stadium before it spiralled out of control and crashed in a fireball.
Thousands of bouquets and scarves have already been left outside the ground.

Leicestershire Police said it believed the dead to be:

His career included flying helicopters for live media broadcasting including Channel 4’s The Big Breakfast and the Virgin Radio traffic helicopter.
Mr Swaffer’s friend Lucie Morris-Marr said he was a “veteran in the field” and would have done all he could to prevent lives being lost in the crash.
She added that he was a “funny and vivacious” man who was in an “aviation love story” with Ms Lechowicz.
“Not many people get to work and travel with their soulmate, travelling the world going to glamorous places,” she said.

The couple were professional pilots who lived together in Camberley, Surrey. Ms Lechowicz moved to the UK from Poland in 1997.
In a statement, the Polish embassy said: “With great sadness, we received the news about the death of Izabela Lechowicz in the Leicester catastrophe.
“She was a great pilot, winner of the #Polka100 contest. It contributed to the creation of a positive image of Poland in the UK.”

Image captionThousands of bouquets of flowers and tributes have been left by Leicester City fans
Mr Srivaddhanaprabha, 60, who was married and had four children, bought Leicester City for £39m in 2010.

Read Also: SCOREBOARD: Updates from top European leagues
Under his ownership the club won the Premier League in 2016, having started the season as 5,000/1 outsiders.
In a statement, Leicester City said the club’s thoughts were with “the Srivaddhanaprabha family and the families of all those on-board at this time of unspeakable loss”.

The club described Mr Srivaddhanaprabha as “a man of kindness, of generosity and a man whose life was defined by the love he devoted to his family and those he so successfully led”.
“Leicester City was a family under his leadership. It is as a family that we will grieve his passing and maintain the pursuit of a vision for the club that is now his legacy,” it added.
A book of condolence will be opened at King Power Stadium from Tuesday morning. The team’s next fixture against Southampton in the EFL Cup, scheduled for Tuesday evening, has been postponed.

Image copyrightWEMBLEY STADIUM
Image captionWembley Stadium has been lit in Leicester colours as one of a number of tributes
Leicester goalkeeper Kasper Schmeichel, who witnesses said ran out of the stadium towards the crash scene, said Mr Srivaddhanaprabha had “changed football forever”.
“I cannot believe this is happening. I am so totally devastated and heartbroken,” he added.
Club captain Wes Morgan tweeted: “Absolutely heartbroken and devastated regarding the news of our chairman. A man that was loved and adored by everyone here at lcfc.” 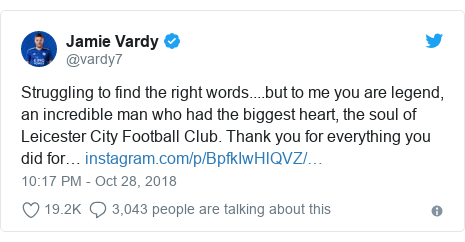 Image Copyright @vardy7@VARDY7
Report
Premier League chief executive Richard Scudamore said: “Vichai was a gentleman who graced the game with his civility and charm and we will miss him enormously.
“His impact on Leicester – the football club and the city – will be remembered forever.”
Paris Saint-Germain, Inter Milan, West Ham United, Tottenham Hotspur, Nottingham Forest and Swansea City were among the football clubs that passed on condolences to Leicester.

Image captionA photo of Vichai Srivaddhanaprabha has been left among the tributes at the club’s ground
The helicopter came down in a car park near the stadium just over an hour after Leicester had drawn 1-1 against West Ham United in the Premier League.
Leicestershire Police confirmed no-one else had been injured and said the Air Accidents Investigation Branch had launched an investigation.

Supt Steve Potter said: “Emergency services were immediately on scene when the crash happened, working to put out the fire and gain access to the helicopter in attempts to reach those inside.
“Despite those efforts, there were no survivors.”
Supt Potter said it was likely to take several days to complete the investigation at the crash site.

Image captionFive people, including the Leicester owner, were killed in the helicopter crash
Freelance photographer Ryan Brown, who was covering the game, saw the helicopter clear the King Power Stadium before it crashed.
He told BBC Radio Leicester: “The engine stopped and I turned round and it made a bit of a whirring noise, like a grinding noise.
“The helicopter just went silent, I turned round and it was just spinning, out of control. And then there was a big bang and then [a] big fireball.”