Find out how much Obour left in MUSIGA’s account

The adept young Ghanaian engineer known for the famous water bicycle invention has proven he has a bag of ideas as he...
Read more
featured

40-year-old man lynched in Nyankpala in the Northern Region

A 40-year-old man has been lynched in Nyankpala in the Northern Region for stealing goats and sheep.On the...
Read more
Coronavirus

The number of COVID-19 cases in Africa has hit the 1 million mark with experts warning that the continent is yet to reach its peak.
Read more

Christopher Sam
Christopher Sam is a web designer, developer and has advanced knowledge in Search Engine Optimization, Responsive Website Design, Emails Marketing, BULK SMS Messaging, Schema Markup and a certified Google Trainer. He is a creator and editor at Hypercitigh.com, an online digital platform focusing on Credible and Timely news and in Ghana.

The former president of Musician Unions of Ghana (MUSIGA), Bice Osei Kuffour, popularly known as Obour, according to the bank statement left ¢265,000 in the Union’s account before he left office.

This was confirmed by MUSIGA’s current treasurer, Samuel Kofi Agyemang, who explained that the money is yet-to-be received by the Union due to closure of Midland Savings and Loans, where the investment was made under the signatory of Obour.

Midland Savings and Loans was part of the 23 savings and loans and finance house companies which licenses were revoked by the Bank of Ghana last year.

Due to that, payments of claims have been issued to the current President Bessa Simons to make way for effective payment through the Consolidated Bank Ghana as soon as possible.

Read the document below: 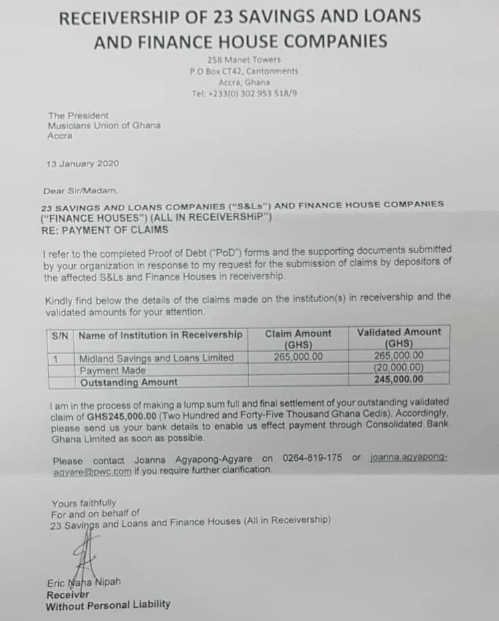 Adomonline.com‘s checks indicate that apart from this amount invested with Midland Savings and Loans, MUSIGA during Obour’s tenure also invested some money at Menzgold and other financial institutions.

Obour, whose tenure ended on August 11, 2019, came under heavy criticisms during his administration where many industry players accused him of misappropriating funds.

But speaking to Lexis Bill on Joy FM, Obour insisted that the two million cedis government support fund from the National Democratic Congress was used to conduct comprehensive research for the players in the Music Industry and for the organisation of the Ghana Music Week.

Meanwhile, Bessa Simon’s appointment was confirmed at a meeting on Friday, August 30.

The Fish whose Heart Weighs as the Size of a Small Car.

They are literally the most big-hearted creatures in world.But have you ever realized just how gigantic a blue...
Read more
Top Story

The 2020 WASSCE has been marred by many untoward acts from students across many institutions in Ghana. The latest to rock an...
Read more
news

The National Cyber Security Centre (NCSC) of the Ministry of Communications, in collaboration with the Criminal Investigation Department...
Read more

In each entire individual they're kidneys present which are bean-shaped organs that carry out a lot of vital features.They’re...
Read more
news

The Fish whose Heart Weighs as the Size of a Small Car.

They are literally the most big-hearted creatures in world.But have you ever realized just how gigantic a blue...
Read more
Articles

The Top 10 Fastest Animals in the World

Some animals are perfectly designed to be the ultimate speed machines.Some of these fly through the air, others...
Read more
Health and Fitness

6 Signs Your Kidneys Are Crying For Help Do Not Ignore.

Kidneys are one of the most important body organs in the human system, when gone wrong the system begins to fail and...
Read more
Health and Fitness

Do You Take Fruits After Eating Any Of These 2 Meals? It Is Unhealthy

Fruits as we already known is good for our health and this is true because it is filled...
Read more