Here Are Some Ghanaian Content Creators You Should Check Out

When the student complained to the warden about the harassment, she was asked to go change her clothes first.

As the rain stopped pouring over Kattangulathur in the outskirts of Chennai on Thursday night, hundreds of students of the SRM Institute of Science and Technology spilled on to the grounds raising their voice in protest. They were angry that a collegemate had been sexually harassed inside the campus and college authorities had reacted with indifference.
Read Also: Harvard’s newspaper has chosen its first black female president and she is 20 years old
Vidya*, a second-year undergraduate student had taken the elevator to reach her room in the sixth floor of hostel at around 3 pm on Thursday. To her shock, a man who was also inside the elevator started masturbating at her.
As she tried to stop the elevator and get out, the man blocked her path. Once the elevator stopped at the fourth floor, she screamed and ran out, looking for help.
Read Also: KNUST Rolls Out 120 Energy Efficiency Advisors
The perpetrator, according to students, was a worker in the campus, who regularly uses the elevator and has access to the hostels in the campus. Speaking to TNM, one of the students who did not want to be identified, said that it took two to three hours for the authorities to scourge through the CCTV camera footage to identify the perpetrator. It was only then that the hostel warden believed the student’s story.
“One of the first things that the warden told us was to change our clothes. She accused us of wearing short clothes implying that the girl deserved what she got. In fact the first response when we went to file a complaint was to go to our room, change our clothes and sleep. How can they be this insensitive?” asks Kripa*, another student, a friend of the victim.
When the warden refused to listen to their complaints, a bunch of students decided to take up the matter strongly.

Girls and boys from inside the campus came out of their hostel rooms to seek justice and demand action on the complaint. Despite the Director and the Registrar being in the campus, they did not listen to the students’ plea and instead chose to ignore their questions, a student alleged.
Read Also: Wisconsin International University to Host Hult Prize 2018/19 Campus Edition
“When we asked the Registrar to listen to us, he told us to send an email and left the campus. The Director said the culprit will be arrested soon, but when we asked if a police complaint had been given, he ignored our question,” says Anita*, a student who took part in the protest.

49 people are talking about this

Not the first instance of inappropriate behaviour
Kripa* says that this was not the first time the workers in the campus exhibited inappropriate behaviour.
“There are a few rooms in our hostel, which has windows opening into the corridor. There have been a lot of instances when we have noticed workers peeking into our rooms in the night. We have complained about that also, but nothing has changed,” she says.
Read Also: How Pastor W.F Kumuyi, A Math Lecturer became a Preacher
She also adds that the culture of blaming the girls when they take up such issues was highly prevalent amongst authorities, especially hostel wardens. “When we go and complain, we are told to cover up and not wear shorts,” she says.
Read Also: EFFISCO student’s ghost ‘leads’ suspected killers to police
Girls don’t feel safe inside the campus
Calling the campus unsafe, Anita says that girls are not allowed to venture outside the campus after 6.30 pm. “We are locked inside our hostel rooms based on a curfew, but then we are now not sure if we are safe even during daytime,” she rues.
Though the university website has information about the Internal Complaints Committee, many students in the campus were not aware who the members were. 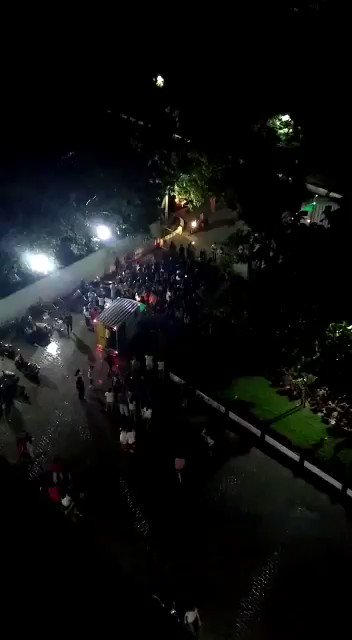 As of late on Thursday night, the students are still out on the campus asking the university management to file a police complaint about the incident. Maraimalai Nagar police station under whose jurisdiction the University falls informed TNM that no FIR had been filed. “A complaint has not been received. Police officers have reached the spot and are conducting inquiries,” said one police official.
*Names have been changed

‘A Historical Event’: WHO Approves First -Ever Malaria Vaccine